Being on a vegan kick, I’m always on the outlook for new ideas, new recipes and new flavors. But I’m not about to go shopping for every single meal. If I’ve got something in the pantry or the fridge, I’ll find a way to use that first. So last night, I opened the refrigerator and spied eggplants, along with a bunch of other vegetables. I couldn’t find a recipe to suit my taste or mood, so I realized it was time to get the creative juice flowing.

Oh boy, did it flow! Just cutting up the fresh produce got me excited, wondering what the end product would look like. Would the flavors explode in my mouth, or would it subtly send me swooning for more ? Or would I chalk it up to yet another recipe that just didn’t wow me? Oh the anticipation as I chopped, diced and squeezed what I had before me into a bowl.

I have to admit that as I prepared to take this dish out of the oven, I nearly lost it. Somehow I pulled the racks from underneath the casserole pan. So you can only imagine what a sight I was, when my mother walked in. I had both hands in the oven (I had mitts on!), half kneeling, half sprawled on the floor, wondering whether I should stick my arm in further to save the dish. I was paranoid about dropping the glass pan. Or burning myself. Fortunately we were able to save it, losing a few pieces to the fiery furnace. After we took a breather, my mother looked at me and shook her head. Why was I so willing to risk hurting myself, after all who cares about a glass pan? My response was simply this: I gotta know what it tastes like!

I just had to know. 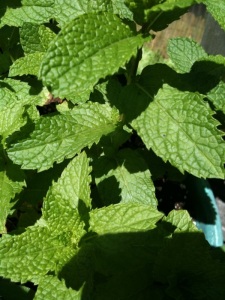 Fresh mint, screaming to be used

And boy, was it worth it! Even my mother, who grew up not fond of eggplants or fresh mint was pleasantly surprised by this creation of mine. So, it can be rewarding when you just stand in your kitchen and try to come up with ways to use what you have! Sure, there’s going to be times where you’ll think, “what the heck did I just do?” Been there, done that. Had to dump a few dishes that way. Normally I prefer just eating it, even if it isn’t that great. But I’ve had a few that was just plain nasty. But this one… was delicious! 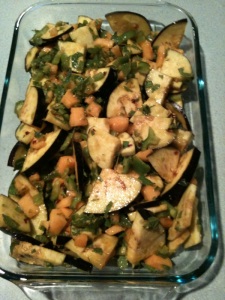 The eggplant dish, all marinated and raring to go! 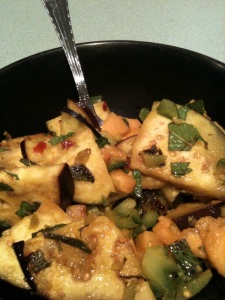 1.) Combine olive oil, spices, juices, and broth in a bowl. Toss in vegetables, including mint (save 1 TBSP for later). Let it marinate for 30 minutes.

2.) Set the oven to broil, and set up the rack to the top position.

3.) Pour the content of the bowl into a glass casserole pan, and put on the rack. Divide the pan in thirds, so broil one 1/3 for 2 minutes, then move it to the center for another 2 minutes, and the last for an additional 2 minutes (so you can get the grilled taste without having to use the actual grill).

4.) Take it out, let cool briefly so it won’t burn your mouth. Add the remaining mint and serve with rice!

The first bite I took was delightful, the sweetness from the cantaloupe bursting in my mouth, with a hint of fire from the jalapeno and the sturdiness yet delicateness of the eggplant all merging together. I went back for seconds. I also had some leftovers today, cold. Still tasted great. I’m definitely making this again!

Now my next challenge is to make something that I can bring along on a camping trip. Oh the possibilities..!

An invigorating start to July

July is the month where you truly believe it is summertime, isn’t it? An abundance of fruit and vegetables screaming to be harvested! It’s as if the stores, the farmer markets and gardeners can’t give away enough of their produce fast enough. Fine by me!

But it can become boring, eating the same thing over and over, doesn’t it?  What if you decided to stir things up, and see how else you can consume it? That’s what I did with portabella mushrooms. I love it grilled, roasted, cut up, mixed into pasta, and side dishes. The other night, I was in the mood for pasta, but not for red sauce or white. What’s left? Olive oil and fresh herbs? Been there, done that. I also spied a beautiful portabella cap sitting in the fridge, waiting to be used. Then it hit me: if I could make a sauce with cashews, why not mushrooms? It turned out to be a delightful surprise, that had my Mom raving!

The best part? I used what I already had lying around the kitchen. Now I realize, the ingredients I used probably aren’t what you can find in every kitchen. I just love using what I already have, instead of letting it go to waste. 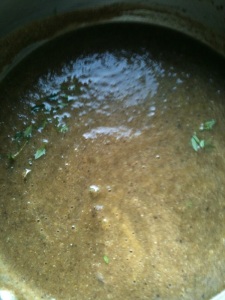 salt and pepper to taste

1.) Sautee onion and garlic in a saucepan with olive oil. When golden, add mushrooms until cooked. Approximately 5 minutes.

2.) Put the mushroom mixture in a blender, add sherry and 1 cup of broth. Puree. After you’re done, return to the pan.

3.) In a separate bowl, mix flour into 1/2 cup of the remaining broth.

4.) Add the creamy broth to the saucepan, and blend. Cook until it’s about to boil. Add fresh thyme (the leaves only). Season to taste.

5.) Serve over pasta, or anything you would normally eat mushrooms with: rice, meat, or even vegetables. Maybe even replace the ketchup in your hamburger?

Want a twist? Dice up another mushroom, and cook it as well, add it to the sauce after it’s been made. Chunks are preferred by some! 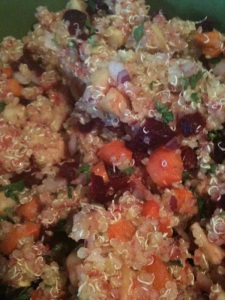 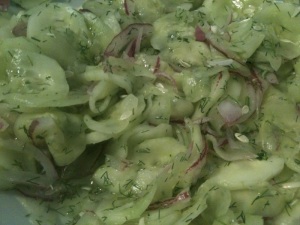 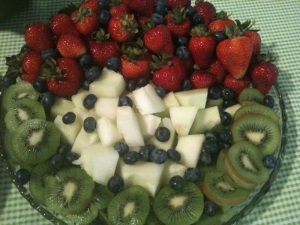 In the last few days, I was fortunate enough to have access to the internet and it’s chock full of recipes to try! Quinoa salad with roasted root vegetables, cucumber and dill salad, and even lemon basil sorbet! The latter blew my mind away.

Let the summer inspire you with its’ surplus!